Being told not to speak is not good enough for some people so an item needs to be used to gag them so they won’t make a sound. To many, this is thrilling and exciting but to others, the thought of having something pushed in their mouth with a material or leather, etc strap tied around their head would be a form of torture they would not like to put into reality 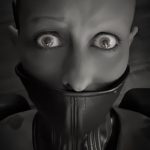 There are many types of gags in all materials that can be used as a mild form of pleasure or if you a masochist then the experience could go as wild as extreme. If your pain threshold is on a high level then the gags can have things attached to them EG: cock gag, Ball gag.

The Mistress/Master who is conducting a session when using gags has to know the health status of the client. If they have trouble with breathing, heart problems, or suffer from claustrophobia will not like gags. They are clients that you need to be sympathetic with and eventually you will come to a conclusion of something similar to what they do like. Gags can be fun if used in the right way with the right people.

If you have a fetish that involves gags and breathe play then do CONTACT ME and we can discuss it further.

Take care in all you do and stay safe. Talk again in the next blogmas tomorrow.