Which Corset Is For You? 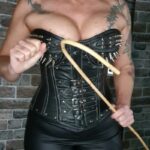 A Comfortable 28 to 29 Inch Waist. Anything tighter And I Won’t Be Able To Breathe Properly

The first corset goes back to the 16th century that was worn by men and women in different outfits. Men for battle and women as undergarments to shape themselves for the outer clothing.

These days Corsets are worn in many different ways but mainly to give the women that hourglass figure.  We all crave to look like Dita Von Teese or close enough but we are not all shaped that way.

Corsets come in all different shapes and sizes but the main reason it’s worn is to give the wearer the feel-good factor.

I love my corsets because whatever shape I have been throughout the years it will always sinch in my waist and give me that bottom-heavy look that many don’t want.

I think these days the trend is coming back again as it did in the 1950s and 60s. Don’t get me wrong as the corset has never gone out of fashion as there’s always a female that wants to make her figure tighter than it naturally is.

There have always been certain years or decades that the cinched in the waist was more popular than others. I was watching a documentary on Danny La Rue last night. Men have to wear undergarments as they don’t have the waist and hips etc that a female has.

Now when wearing a corset for the first time it will be a learning curve for you. It is like you have to learn to breathe again. Comfort is the main thing because if you can’t breathe properly then you will feel very uncomfortable and dizzy. 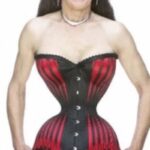 There’s no point in being as silly as some females will go to even removing ribs to get smaller. This female in the photo was on a Tyra Banks chat show and her waist measured 18 inches but inside the corset, it is 15 inches.

Ribs are there for a reason, to protect the internal organs and if you move them around then you looking for trouble. The less time in hospital the better I always say.

The love of corsets can be so much fun though without being too serious about it. There are loads of different designs and materials that they are made out of.

A while ago a mentioned about I wanted to add a store to this website so you could purchase videos and photos. That is not possible.

So I have decided to make a completely new one (still keeping this one but i will link the 2 websites together through links you can click onto.

It will be similar to this one as in blogs and real life photography but it will be predominately an online store.

If there is anything you would like for me to look into researching for you to purchase then by all means let me know.

The content will be equipment and toys, corsets, compression garments, and shapewear and crossdressing items (silicone skin wear for body shaping as in boobs, butts, and bodysuits).

I think with the way this world is carrying on my appointments are going too far and few between so I am putting my knowledge to better use.

It is in working progress at the moment so I will keep you updated as and when it will be live for you to view.

So I will look forward to hearing from you if you have anything to ask me.